Shopper marketing: Strategies on the up* 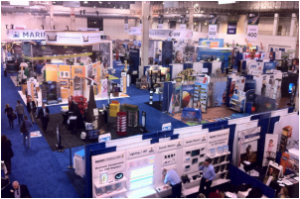 Shopper Marketing Expo, the largest shopper marketing trade fair in the world ended on
Thursday, 18th October, in Chicago. We had three days of high level discussions and seminars that boasted the participation of CEOs and directors from the largest consumer-goods companies, retailers and American advertising agencies. On the agenda was
the reinvention of the business environment in order to conquer and maintain shopper loyalty.
The crisis permeated every conversation, of course. According to the Wall Street Journal, the worst is over. However, according to Wendy Liebmann, CEO & Chief Shopper of WSL Strategic Retail (who led the main panel of the day, alongside Michael Bloom, president of the popular retail chain Family Dollar), 80% of American shoppers believe that the recession is
still going to continue for at least the next four years.

This means that for another four years, at least, this shopper is going to maintain the new habits acquired with the start of the crisis in 2008: 75% put price first in their purchase decisions and 52% have money only for necessary items. Attitudes which, although for us, in Brazil, are very much a part of the day to day of a good portion of the consumer market, are a novelty for Americans: shoppers having to think and do their sums before buying anything,
sticking to shopping lists and changing stores in search of advantages. This is the new reality of the United States.

Thus, American retail has rapidly mobilized itself, and the search is now on to understand this new shopper. But one cannot know what he/she does simply through data and sectoral panels. The great challenge is to discover why the shopper is behaving this way, with the purpose of guaranteeing the delivery of the expectations of this shopper: i.e. value.

There is a general understanding that in order to deliver value to the shopper, one needs to create relevance, and one only manages to do this by means of an emotional connection. This is the definition of the new driver of growth, the bet of Family Dollar to increase the share of its current customers’ wallets and to win over new customers – those in
search of alternative cheaper stores, but also with stores which deliver convenience and leading brands, in other words, value. More than opening new stores, Family Dollar is betting everything on generating fidelity and more visits to its current stores. And it is asking its suppliers, especially leading brands, to adjust their channel strategies and start to serve this shopper. Why not put your brand into Family Dollar, instead of just Walgreens, if the shopper
is doing their shopping here?

What can be clearly detected is a mobilization of the American market in the same direction. The presentations, in general, focused either on tools that guarantee the deep understanding of the “whys and wherefores” of shopper behavior, or in shopper marketing strategies that deliver solutions to shoppers and generate emotional connections of these with their favorite brands. Today, these are the essential components of what we call the shopping experience: understanding the essence, communicating the triggers and making the connection.

And all of this happens at the point-of-sale (POS), where brands converse with shoppers through POP materials, environmentation, packaging. Today, when everyone wants to redesign this conversation, the design has become more important than ever, as it is through this that the communication strategies come to life inside the store. What changes is how the creative process happens: in the American shopper marketing market, the design is set by the discoveries of the research and has its efficiency evaluated by powerful tools, that extrapolate the financial return.

In difference to other years, in which technological innovations (QR Codes, mobile, APPs, etc.) were the center of attention during the fair and discussion panels, this year they remained firmly in the background and appeared like tools. Important, of course, as means for the delivery of experience. But they no longer caused the fever they had done before, and mainly because they don’t really reveal these “whys”.

Their role is clearer, and the expectations about results are more moderated. One example is the Peapod grocery chain, whose sales are exclusively on-line with rapid delivery. Following an important social trend, that of a search for convenience, the chain has just made virtual stores available in the subways of Chicago, the same as Tesco’s example in Korea. It is the mobile serving convenience.

This increasingly shows how there is less fascination for technology and more for strategy. American retail today uses technology at the service of its main objectives: to be more relevant to the shopper, deliver value and strengthen the connection. The chain-store Target, for example, has started to make lists of its price comparisons with those of Amazon (its great rival in the virtual world) directly available in the smart-phones of its shoppers. It was a response to the strategy that Amazon had created to eliminate an important purchase barrier for some of its categories – the delay in delivery – mounting a gigantic scheme of warehouses across the country to guarantee same-day delivery.

A battle of the Titans, in an immense market, which focuses its efforts on potentializing the relation between retail, brands and agencies, in search of common gain, and no longer in calculating the ROI of activation actions and materials at the POS, the phantom that had haunted many marketing teams for its immense complexity in measuring and low reliability of the results. What we saw here is the construction of an arena of collaboration, where targets, objectives, information and strategies are openly discussed. The result was a parade of success stories for their strategic focus, scientific rigor and creative assertiveness.

At the Fair, we met Juliana Costa, national manager of Trade Marketing of DPA, refrigerated division of Nestlé, one of the few Brazilian women present at the event. According to her, Brazil has much to learn with the way industries and agencies manage to systematize thought, in order to direct the POS actions, taking the shopper as the focal point of strategy.

Companies in Brazil need to transform shopper marketing into the central link of its strategies in much the same way as they do consumer marketing today, which already has quite well structured tools and methodologies. She believes that this is the new road to conquering a shopper who, contrary to American shoppers, is passing the stage of “What I need” to the“What I Want”.